Why We Wear Red Coats 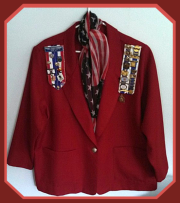 After the French and Indian War, 1754-1763, Fort Stanwix was abandoned by the British who, leaving in a rush, left behind some of their belongings and supplies.

Just before the American Revolution began, General Washington ordered that Fort Stanwix be rebuilt and occupied by colonists. During the clean-up and rebuilding, some of the militia found several boxes of old English uniforms and weapons in good condition.  Knowing how poor and ill-equipped the militia was, permission was given to take the lobsterback coats and modify them for their own use.  From that point onward, this small group was called the "Red Coats of Fort Stanwix."

In honor of these men and women and our heritage, members of the Fort Stanwix Chapter NSDAR have often chosen to wear red coats (as pictured above) to patriotic events and meetings.