The Fort Stanwix Chapter was organized in Rome, New York, on January 13, 1896, by Mrs. Elizabeth R.H. Bright, organizing regent, along with other interested women of the city, including Polly Hubbard Vincent, a Real Daughter.

The Chapter was named in honor of Fort Stanwix, constructed in what is now Rome, New York, on August 23, 1758.  Our Chapter was granted its charter on June 19, 1896, and was signed by forty-three members. 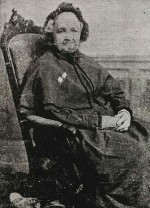 When the Fort Stanwix Chapter of the NSDAR was formed in 1896, Polly Vincent was 95 years old and the last remaining real daughter, living in Rome, New York, of a Revolutionary soldier.  Our newborn chapter bestowed upon her honorary membership and, with that, a promise to keep her name alive.

Polly's father, Thomas Hubbard (Hubbart), served in the Connecticut Volunteers throughout seven long years of our War for Independence.  Upon mustering out, Thomas Hubbard settled in the town of Newport, which lies within Herkimer County.  It was there that Polly was born in December 1800, in the dawn of the first new century of our young country.  The war of revolution had been won, but the future of our freedom was far from secured.

Polly grew to womanhood in a log cabin in the township of Russia, still within Herkimer County. In this place, where Thomas Hubbart made his final home, the wilderness was right at the end of the road.  As a young girl of ten or twelve years, Polly was already a proficient spinner and mature enough to be "hired out" as a spinner to other households.  Thirty "knots" of warp (the measurement of yarn used to warp a loom) was considered a day's work.

In 1812, another war was fought, one which would secure forever our hard won independence. Polly was a young girl during these war years, when the old battlegrounds of upper New York State were revisited.  In her advanced age, Polly recalled vividly the fright she felt upon encountering a troop of marching soldiers, in service to the war, as she walked a neighborhood road.  She was heartened to hear that they intended no harm and, indeed, they were encamped for some time very near to her home.

Polly lost her father, Thomas, as a young woman of twenty years, but she remembered well the stories and songs her father had shared within the family circle. Among these tales is one of the brutal murder and kidnappings of Thomas' brother and his family at the hands of Native Americans, having been provoked by Tories.  Another told of the manner in which Thomas had punished a Tory, via a tavern chair to the head, for his boasting of some truly horrific (were they true?) war crimes.  Upon inquiring of the sum to make amends to the proprietor for his broken chair, Thomas was told, "Nothing. You can break every chair in the place that way, if you wish!"

At the age of twenty-six, Polly married Rodman Gardner Vincent; a marriage that lasted forty years, until Rodman's death.  During the years of her marriage, she gave birth to six children, only two of whom were living at the time of her own death in 1899.  Polly had made homes in the towns of Russia, Annsville (where she was widowed), and Trenton before settling, at last, in the home of her daughter, Mrs. M. A. Conly of Rome.

In recognition of Polly's unique position as one of the very few remaining, true daughters of an American patriot soldier, Fort Stanwix Chapter gifted her with a commemorative spoon that Polly numbered among her most treasured possessions. Polly lived with her daughter the last twenty-seven years of her life, and it was there that she died in January 1899, sadly denied the century mark, though she was the oldest resident of Rome at the time of her death.